A report from recent work

What Does the Hobby Gaming Community Think?

While the design of In the Loop draws on traditional game elements, it also has an underlying learning element. We were curious how game enthusiasts would react to the game so we entered In the Loop in the Boston Festival of Indie Games which attracts. To our surprise and excitement, we were selected as a feature game of 2016!

At the festival there was clear enthusiasm for In the Loop. We demoed the game consistently over the day, losing track after we played it over six times. As one of the only serious games there, we received some great feedback as well as some design feedback. Players particularly liked how real time is incorporated into game play.

“Not many games still use roll and move mechanics, but it works for this game.”

“More games should use real time! I haven’t really seen this used before.” 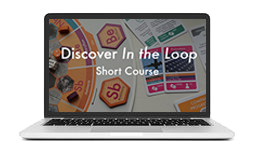